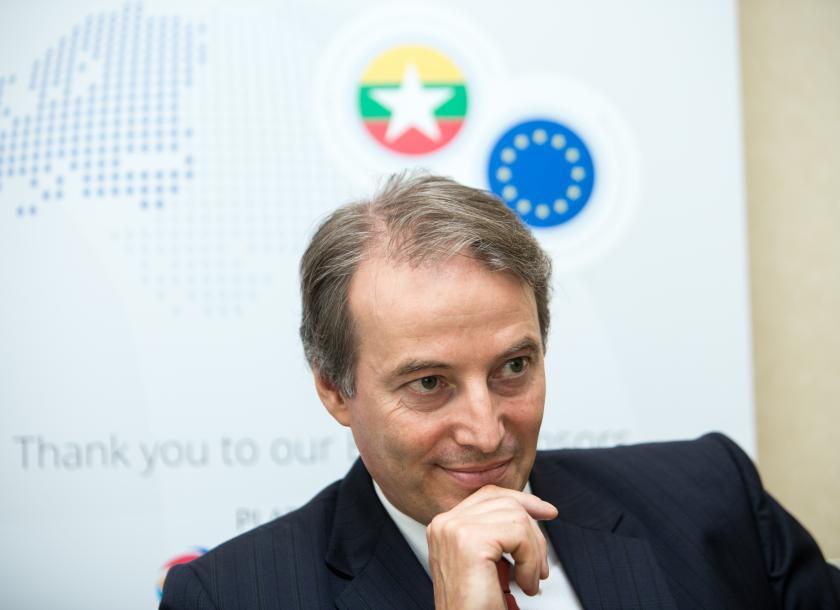 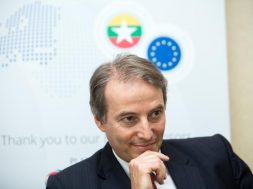 The EU’s top envoy to Myanmar pledged to continue supporting the economy over the duration of the COVID-19 pandemic and beyond. In an exit interview with The Myanmar Times, EU Ambassador Kristian Schmidt said he is proud to have shown the country that the EU is a “reliable and steadfast partner in a moment of a global crisis” with wide-ranging aid programmes.

He referred to K7.9 billion of emergency cash set up by the bloc for workers in the garment industry, many of whom lost their jobs as a result of the economic impact of the pandemic. Over K2 billion has been dispersed to 21,690 workers in early July.

If more support is deemed needed, ambassador Schmidt said the EU would continue paying the garment workers “for as long as the crisis lasts” and even extend it to returning migrant workers.
Last month, Austria, Finland, France, Germany, the Netherlands and Poland deferred repayments from Myanmar totalling $98 million including interest for the May to December 2020 period. The debt amount comprises 20 percent of Myanmar’s scheduled debt repayments, which stands at approximately $500 million, during this period. The envoy also underlined Myanmar’s potential in renewable energy but urged the authorities to give investors more time to apply for the 1GW solar farm tender.

“What is really needed are investments building back a green economy with renewable energy rather than … all these emergency projects that we see,” he commented. The solar panel tender, announced in May, came under fire for its extremely short deadline and tough conditions when mobility restrictions are still in place. Though the deadline has now been extended for a month to mid-July, European businesses believe it should be considerably longer.

“I have appealed on behalf of the European member states and companies that there is a level-playing field and that this tender is used as an opportunity to send a signal to all possible investors that it’s worthwhile showing an interest in these opportunities,” ambassador Schmidt said.“This is what Myanmar needs, it must be a success in order to show that the doors are open for similar investments replicated.”

“We didn’t make a fuss about it,” he said, recalling the bloc’s assistance to China when the latter was the centre of the outbreak. “A bit more modesty, considering
where the outbreak came from, would be elegant.”

Responding to concerns that China is exploiting the pandemic as an opportunity to speed up the Belt and Road Initiative projects, Ambassador Schmidt believes
Myanmar is “well-advised” in looking at the projects in its own interest.

The entry point to the country’s economic recovery should not be Belt and Road or what China wants but what Myanmar needs, he said. COVID-19’s economic disruptions have exposed the risks of over-reliance on one export market, i.e. China, he added.

As part of his last messages to the country, Ambassador Schmidt highlighted unity as a key to peace, only through which Myanmar’s potential could be realised. “I sincerely hope Myanmar will take its place at the table of nations with dignity as a full member of the international community,” he said, and wished for a successful peace process, as the fourth peace talk is scheduled to convene next month.

For him, the criticisms that UN resolutions and the EU’s review of Myanmar’s tariff-free access to the Single Market are infringing the country’s sovereignty are
unwarranted.

“The threat to Myanmar’s sovereignty comes from within, comes from the lack of unity still among the ethnic groups and the government,” he said. “There is
sovereignty in unity, and unity depends on equality and recognition of equal rights and dignity. When these things come together, I think Myanmar would become a stronger nation.”