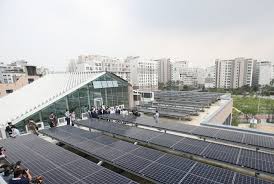 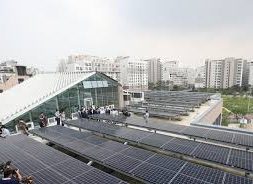 The share of Korean-made solar cells in the domestic market was estimated at about 20 percent in the first half of this year, a dramatic decrease from about 50 percent in 2018-2019, the Korea Energy Agency said Wednesday.

The primary factor behind the plunge in the market share of domestic-made solar cells is the ‘export push’ by Chinese companies, which are attempting to offset the reduction in the Chinese government’s subsidies by increasing exports.

In addition, as the prices for renewable energy certificates (RECs) declined, resulting in deterioration of profitability, demand for cheaper imports from China is on the rise.

Another factor is the increase in shipments of domestic-made solar cells to the U.S.

To cope with American safeguard measures, large South Korean companies such as Hanwha Q Cells and LG Electronics Inc. set up module plants in the U.S., resulting in a large quantity of domestic-made cells being exported to U.S. plants starting from late last year.

Despite the fact that domestic companies’ solar cell production capacity is estimated at about 7.3 gigawatts annually, twice as high as domestic demand, the supply of domestic-made solar cells currently lags behind demand.

In reality, domestic companies are showing preference towards exporting their products to the U.S. and European markets where prices remain high due to the robust demand for premium solar cells and modules, rather than selling at home.