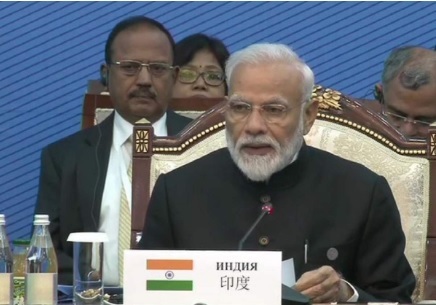 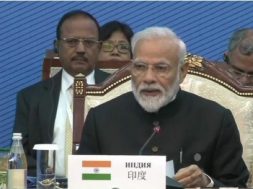 H for healthcare cooperation, E for economic cooperation, A for alternate energy, L for literature and culture, T for terrorism-free society and H for humanitarian cooperation, Modi said.

BISHKEK: Prime Minister Narendra Modi on Friday called for greater cooperation among the SCO countries in combatting terrorism, promoting economy, alternate energy and healthcare as he outlined India’s commitment to peace and economic prosperity in the region.

“Our vision is to strengthen the healthy cooperation among us. Using the letters of HEALTH, we can make a good template for cooperation.

“H for healthcare cooperation, E for economic cooperation, A for alternate energy, L for literature and culture, T for terrorism-free society and H for humanitarian cooperation,” Modi said.

SCO region and history, civilization and culture of India are interconnected for thousands of years, he said. “Our shared area is in great need of better connectivity in the modern era,” he said.

“Respect for sovereignty, regional integrity, good governance, transparency, practicality and reliability should be the basis of connectivity initiatives. The importance of people-to-people contact with physical connectivity is not less,” he said in an apparent reference to China’s massive infrastructure development under the China-Pakistan Economic Corridor (CPEC) which traverses through Pakistan-occupied Kashmir. India opposes the USD 60 billion CPEC as it is being laid through PoK.

It has been two years since India became a member of the SCO. India has contributed positively in all the activities of the SCO, he said.

India’s e-tourist visa facility is available to most of the SCO member countries, he said.

“On the website of India Tourism, a new 24*7 helpline will be launched in the Russian language for the convenience of tourists from the SCO countries,” he said.

“Our vision is to strengthen the healthy cooperation. Using the letters of HEALTH, we can make a good template for cooperation.

“H for healthcare cooperation, E for economic cooperation, A for alternate energy, L for literature and culture, T for terrorism-free society and H for humanitarian cooperation,” Modi said.

There is a need to emphasise on the healthcare work plan. India would be happy to share its experience in telemedicine and health tourism, he said.

“Economic cooperation is the basis of our people’s future. Unilateralism and protectionism has not benefitted anyone. We need an open and all-inclusive trade policy at the WTO so that the interests of every countries specially the developing ones can be take care of,” Modi said.

India is committed to make a favourable environment for the economic cooperation between the SCO member countries, he said.

International Solar Alliance (ISA) is India’s joint initiative whose objective is to mobilise funds for reducing the cost of energy, he said.

“We welcome the SCO member states in the initiative. India is also ready to share its experience in generating the additional sources of energy,” Modi said.

“Introduction of each other’s literature to our youths will strengthen our relations. Ten top composition of India’s literature will be translated in the language of SCO member countries,” he said.

Literature and culture provide our societies a positive activity, specially they stop the spread of radicalisation among the youths in our society.

To combat the menace of terrorism, countries will have to come out of their narrow purview to unite against it, Modi said.

“Countries sponsoring, aiding and funding terrorism must be held accountable,” he said at the summit which was also attended by Pakistan Prime Minister Imran Khan.

India has been playing the role of first responder in the event of disaster and humanitarian cooperation, he said.

“We must pay special attention to the topic of Disaster Resilient Infrastructure,” Modi added.

Modi arrived in the Kyrgyz capital on Thursday for the two-day SCO summit. The SCO is a China-led 8-member economic and security bloc with India and Pakistan being admitted to the grouping in 2017.