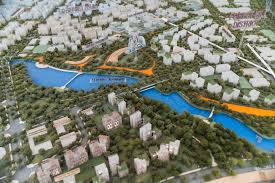 Giant solar-powered air-conditioners, vacuum garbage collection, subterranean roads for electric vehicles, urban farms and green architecture. Put them all together and you have Tengah, Singapore’s most ambitious project yet to build the city of the future.

Tengah, which means ‘center’ in the local Malay language, is part of Singapore’s effort to reduce a carbon footprint that’s bigger than some countries that are 50 times its size, and to promote sustainability in energy, water and waste. The Southeast Asian nation, which is smaller than New York City, has set a target of capping its emissions by around 2030 and then halving them by 2050.

Key to reaching that goal will be to tackle the city’s debilitating tropical heat and humidity, while cutting the nation’s ever-rising energy bill for air-conditioning.

Once described by founding prime minister Lee Kuan Yew as the greatest invention of the 20th century, air-con is now widespread in homes and offices. The nation has more cooling units per capita than anywhere else in Southeast Asia. With tropical temperatures averaging around 27 Celsius (81 Fahrenheit) year-round and rising, the amount of power needed to cool Singapore is projected to grow 73% between 2010 and 2030, according to local research.

To slow the increase, the new town will use a district cooling network based on a commercial system in Singapore’s Marina Bay Financial District, where refrigeration plants and pipes were laid underground before the offices were built.

In Tengah, the cooling units will be solar powered and installed on rooftops of public-housing blocks, with chilled water piped through the buildings. The system’s operator, SP Group, says the network can cut energy use by 30% — an emissions saving equivalent to 4,500 gasoline-powered cars. Residents have the option of connecting to the centralized cooling, or buying and running their own traditional air-con units.Read More..