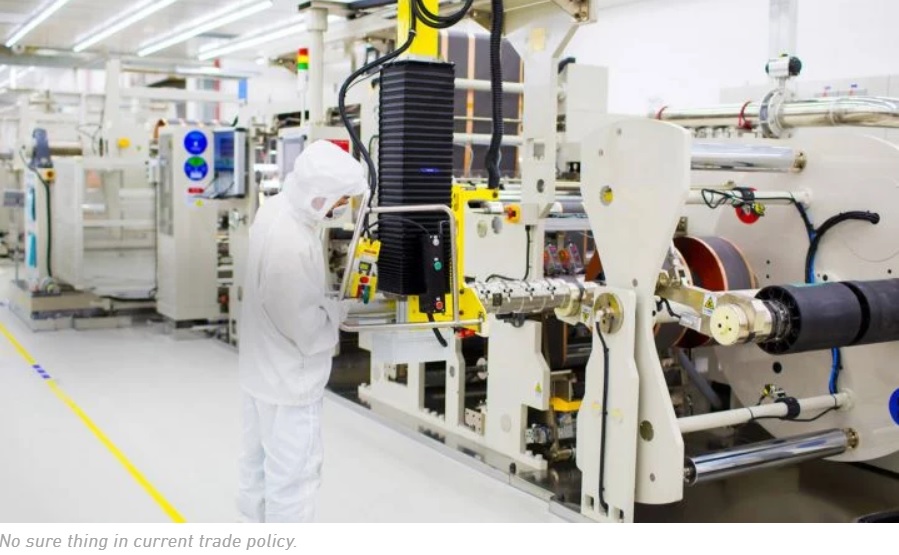 The drop from 15 percent to 7.5 percent will improve project economics, but uncertainty lingers.

The White House halved import tariffs on batteries manufactured in China as part of the larger trade deal signed this week.

The tariff on batteries, just part of $300 billion in Chinese goods targeted by the White House last year, will fall from 15 percent to 7.5 percent, effective February 14. The move will incrementally improve economics for grid storage projects planning to use battery cells, modules and packs made in China. However, the decision does not end policy interference in the energy storage marketplace. The reduction came in response to a Phase One trade agreement; further negotiations may lead to additional changes.

“For sure, this is a step in the right direction, but we believe lithium-ion batteries shouldn’t have been listed for tariffs on Chinese goods in the first place,” said Kelly Speakes-Backman, CEO of the Energy Storage Association, in an email Friday.

A few years ago, battery system integrators typically preferred top-tier cell manufacturers in South Korea or Japan. But as supply for those products tightened up in recent years, buyers increasingly turned to China, where a maturing supply chain alongside a booming electric vehicle industry had achieved the levels of quality U.S. clients were looking for.

Now, about 40 percent of lithium-ion battery projects for U.S. grid storage import from China, Speakes-Backman said. Those projects had to absorb sudden cost fluctuations when the tariffs went into effect September 1. The U.S. Trade Representative announced the tariffs August 20 at a rate of 10 percent, then upped them to 15 percent on the eve of implementation, “at the direction of the President.”

“This tariff, especially considering the timeline of implementation, caused unnecessary uncertainty in the market, and what’s more, runs counter to the many policies the federal government has put in place to encourage the widespread deployment of energy storage technologies,” Speakes-Backman added.

Energy storage, with its applications for grid resilience and more efficient operation of the energy system, has enjoyed bipartisan support in Washington. Just last week, the Department of Energy unveiled an energy storage “Grand Challenge” to mobilize funding and institutional resources to build a thriving domestic storage industry by 2030.

Currently, almost all of the battery capacity installed in the U.S. comes from other countries, with a few exceptions, like Tesla’s manufacturing joint venture with Panasonic. The DOE wants to build out national supply chains for storage as a critical national resource.

The battery import tariffs, though, were not invoked as an effort to nurse infant industry. They joined many other goods as leverage to extract concessions from China in the trade war. Building domestic manufacturing for batteries will require years of sustained industrial planning.

Now, market participants must make purchase decisions based on the new tariff level, or gamble on further changes coming soon. The trade deal agreed to this week is part one of two, according to the White House, and the second phase is slated for completion after the 2020 election.

“The U.S. Trade Representative will continue to consider the actions being taken in this investigation,” it noted, and could make further modifications if appropriate.