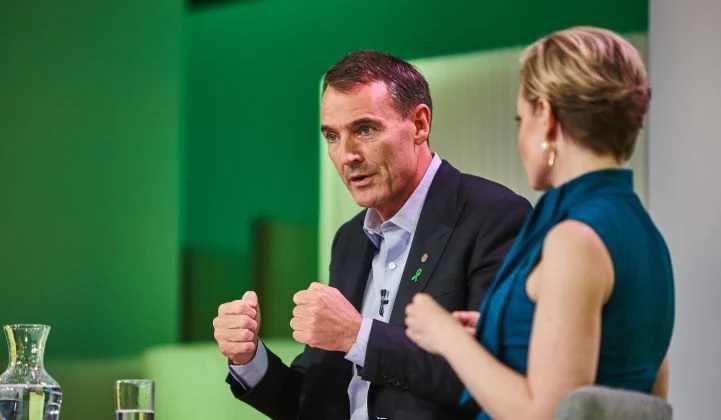 Potential investments in offshore wind and hydrogen are on the near-term horizon, says CEO Bernard Looney.

During the company’s Q3 results call, Bernard Looney said BP would “probably” bid in offshore wind auctions that are scheduled in the next six months. The firm revealed a U.S.-focused partnership with Equinor in September, its first foray into offshore wind. Looney said bidding in auctions over the next six months would also be carried out in partnerships rather than independently.

BP is targeting 20 gigawatts of renewables by 2025 and 50 GW by 2030. It currently has around 10 GW completed or in the works and options on another 20 GW. Most of its early successes have come via its 50 percent stake in solar developer Lightsource BP.

Looney said the company is more likely to add megawatts via partnerships, like those with Lightsource BP and Equinor, and capacity auctions than through merger and acquisition activity.

“Partnerships will be…a key factor in this build-out, quite frankly, just like [they are] in the traditional oil and gas business. […] We partner all around the world today in oil and gas, and partnership will be no different as we look to build out our low-carbon position.”

“Over the coming six months, you’ll probably see us bid [in offshore auction rounds]. We’ll do that in partnerships; we consider that a sort of organic build-out,” he said, adding that there are no “material” merger and acquisition deals in the immediate future but that they should not be ruled out as a possibility.

French rival Total has made several huge deals to swell its own portfolio of renewables, including major solar deals in Spain and India and wind acquisitions in the U.K., Denmark and France. Three solar deals in Spain have netted the company more than 5 gigawatts of capacity.

Like many of its peers, BP is eyeing the potential of hydrogen across its business. Looney again stated that hydrogen is unlikely to become a significant accounting line until 2030. Despite that, he trailed an uptick in hydrogen activity in the short term.

BP is backing both blue and green hydrogen. A gas power plant in northeast England with carbon capture and storage capabilities will be the foundation of a low-carbon industrial cluster with blue hydrogen fed to industrial customers.

“I think hydrogen is a core part of what we believe in for the future,” he told analysts, adding that the focus for BP will be heavy transport and industry, with the company looking at using hydrogen at its own refineries in Germany. It is also exploring a green hydrogen distribution trial with utility RWE.

“We are believers in hydrogen being a fuel of choice, and maybe the fuel of choice for heavy-duty transport over the medium term. We’re in the midst of exploring that more [and the] partnerships that we might have around the world. That’s work that’s ongoing at the moment,” said Looney.

“You should expect to see a bit more from us in the coming months and certainly as we head into 2021,” he added.

BP’s Q3 results saw it post a modest, and surprise, profit of $100 million. Financial analysts had been expecting a similar-sized loss. The figure compares to losses of $6.7 billion in the second quarter of 2020 when oil and gas asset write-downs hit it hard.

The company also managed to dial its debt down by $500 million as it continues to improve its balance sheet and invest in low-carbon technology and services. To that end, the company halved its dividend earlier this year, the first dividend cut in a decade.