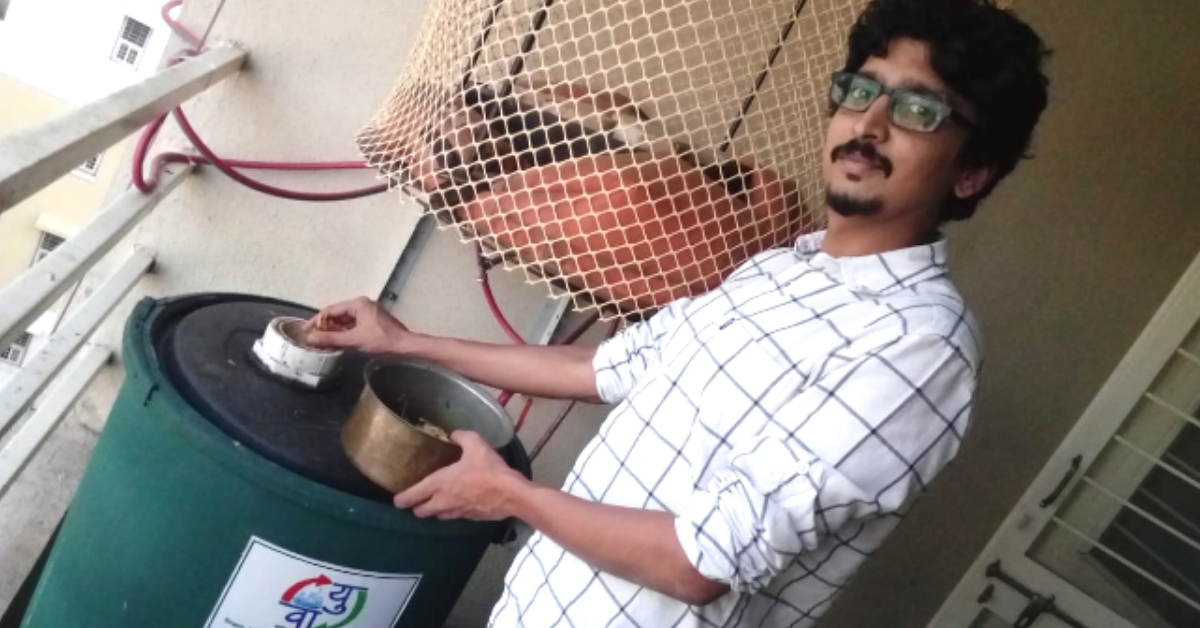 With the Garbage of His Neighbours, Pune Engineer Produces 700 Litres of Biofuel 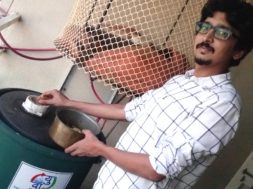 With the Garbage of His Neighbours, Pune Engineer Produces 700 Litres of Biofuel

4 Nuclear Reactors' Worth of Renewable Electricity Wasted in Southwest Japan

A Ray of Sunshine: Solar Industry Gets Fresh Push From PLI Scheme

“Our organic waste is not a problem and is actually a solution to our energy problem. Social collaborations are very essential in such a scenario. For example, in our society, everyone segregates their own waste.”

Priyadarshan Sahasrabuddhe, a 34-year-old engineer and conservationist from Pune is asking his neighbours to leave their garbage at his doorstep.

After all, he needs their trash in his kitchen.

In an effort to eliminate his dependency on non-renewable sources like LPG, Priyadarshan has installed a biofuel plant called Vaayu in his kitchen that converts carbohydrates from organic waste into methane gas.

“A balloon kind of a structure has been installed, where the biogas produced from the containers is stored. The balloon is connected to the pipeline [of the] stovepipe,” he told the Pune Mirror.

Vaayu is fueled by the waste generated in his and his neighbours’ kitchens. It produces about 700 litres of gas—more than 70% of what his house needs.

Speaking to The Better India, Priyadarshan said, “I strongly believe that initiatives like these need to start at the grassroots level. Many of us are strongly advocating a green living—we reduce the use of plastic, segregate our waste etc. But what makes us continue is when our efforts turn into something substantial and useful right in front of our eyes.”

Explaining the purpose that the plant serves, he says, “Every day when we put in food waste, the liquid slurry comes out. The slurry is an excellent manure for plants and is to be used in the adequate proportion. Every six months we service the system and remove solid undigested material which is fibrous, and this again goes back to the garden. We do not need to crush food and can put it as is. Also, we do not need any running energy to operate Vaayu as it runs on its own.”

Priyadarshan started this journey by approaching the neighbours in his building. He explained the importance of segregating waste and also how they could help him set up a biofuel kitchen.

His neighbours wanted to know why he needed others to provide him with waste, so he explained that he was experimenting with the use of biofuel at his home.

“About 11 kg of waste is given to me every day, which includes remains of raw vegetables and even stale food,” he told the Pune Mirror, adding that “I have four containers with a capacity of 2 kg each. People from the building deposit their garbage in the collection bin, and my four friends—who I live with—keep on adding to the containers.”

Priyadarshan has also started an informal community of like-minded nature enthusiasts who come up with innovative solutions and share them with others. The community, Vaayu Mitra, provides biofuel solutions according to the number of people residing in a house.

“Our organic waste is not a problem and is actually a solution to our energy problem. Social collaborations are very essential in such a scenario.

For example, in our society, everyone segregates their own waste. Since the benefit of the gas is also local, there is more likelihood of sustainability.

We are working with Swaccha which is a society of people who collect waste and are training them to operate biogas plants so that they become energy suppliers rather than waste pickers. This increased value will mean better remuneration,” he states.

Whether it is lessening our carbon footprint or an attempt to save a few thousand rupees every year, the topic of utilising renewable sources needs to be approached in various ways for various people, he explained.

Sanjay Joshi, the chairman of the housing society, told the Pune Mirror that this innovation by Priyadarshan has been an inspiration and will be embraced by other residents soon.

“Garbage disposal is a global problem. If each society learns to treat its garbage on their premises, it can create a significant impact on the environment positively. Till now, the performance of the bio-plant at Sahasrabuddhe’s house is good. If it continues the same way, we will install similar setups in each building from next month,” he said.

Today, even as the winter is restricting bacterial activity in the biogas plant, Priyadarshan’s biofuel plant manages to produce 600-700 litres of the 1000 litresthe house needs. Summers are better though, and the conservationist plans on repositioning the plant in the terrace such that it gets enough heat even in the cold months.

tags: Pune Engineer Produces 700 Litres of Biofuel With the Garbage of His Neighbours
50