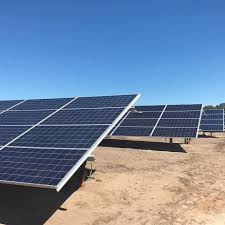 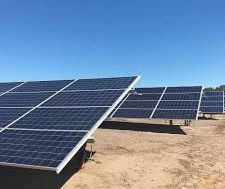 Developing green energy is one of the major industry policies that President Tsai Ing-wen (蔡英文) pledged when she started her first term in office in 2016. Based on the Tsai administration’s guidelines, renewable energy is to make up 20 percent of the nation’s total power generation in 2025 and solar power is to have the lion’s share with a contribution of 20 gigawatts (GW).

The goal of building 3GW of rooftop solar panels was reached last year, ahead of schedule, as panels have been installed on roofs of schools, government agencies, factories and houses.

However, projects involving ground-mount solar panels and solar arrays built on top of fish farms have hit a wall: Only 20 percent of newly installed solar power last year was ground-mount systems. The main reason for that is a shortage of land.

“It would be more than satisfactory to see as much as 1.5GW — same with last year — of ground-mount solar power installed,” Sharon Chen (陳君盈), a solar industry analyst who used to work for TrendForce Corp, told an industry forum last week.

Due to land scarcity, the bureau said it has to set a more “practical” target and reduced the ground-mount solar power installation target to 14GW, from 17GW, by 2025.

Compounding the issue, the Council of Agriculture in July barred renewable energy developers from placing solar panels on farmland — known as agrivoltaics — over concerns that the crops would not receive sufficient sunlight, resulting in lower yields. However, a growing number of international studies show that agrivoltaics can benefit crop yields as well as solar energy developers, but the council turned a deaf ear to the findings and insisted that solar energy developers focus on rooftop solar panels and fish farm arrays, instead of agrivoltaics, going directly against the Cabinet’s renewable energy policy.

The council’s inflexibility significantly reduces the amount of land that can be used for solar power generation and jeopardizes the government’s goal of substituting 20GW of electricity derived from coal with solar power by 2025, the Taiwan Photovoltaic Industrial Association has said.

The Cabinet has promised to help overcome the inconsistencies among government agencies and the Ministry of Economic Affairs has said farmland should be utilized “smartly.”

However, no progress has been made. Solar power developers are still facing the challenge of finding plots of land to erect ground-mount solar panels.

It is clear that conflicts between government agencies is the main obstacle to the nation’s energy transformation. To speed up its development, the government needs to resolve the conflicts, while making sure renewable energy does not come at the expense of farmers’ livelihoods and the environment.