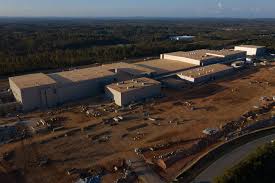 Automakers are investing billions of dollars to bring new electric vehicles to consumers in the U.S. and other global markets, but their success hinges on securing the most critical and expensive component: the battery.

A handful of companies based in China, Japan and South Korea make automotive-grade battery cells, which has upset the traditional dynamic between carmakers and parts suppliers. These battery giants — though little known to the general public and relatively new to the auto industry’s sprawling supply chain — are key to manufacturers’ goals of bringing dozens of new EV models to U.S. showrooms by 2025.

“There are not enough batteries to fulfill the automakers’ near-term promises,” said Sam Jaffe, managing director of Cairn ERA, an energy-storage consulting firm in Boulder, Colorado. “A lot of new battery factories are being built. But there is a battery-supply problem in the near term. All of the incumbent automakers are scrambling at this point.”

Strained logistics, production delays and battles over intellectual property have heightened tensions between carmakers and this new breed of supplier, which wields far greater leverage than suppliers of camshafts, mufflers and pistons. The auto industry’s sudden embrace of EVs also may result in more incidents like recent recalls of four different models for battery-fire risks.

Ford Motor Co., one of the companies doing a recall, now has to team up with other automakers to meet European emissions regulations to avoid the prospect of fines.

Shortages loom as an even larger problem, albeit one that may only be short-term as battery manufacturers ramp up output. Volkswagen AG unit Audi had to pause production in February of its e-Tron, and Jaguar Land Rover Automotive Plc of the Tata Group that same month reportedly suspended output of the I-Pace due to bottlenecks with battery supplier LG Chem Ltd.

Ford and VW have warned that a U.S. legal dispute between LG Chem and fellow South Korean producer SK Innovation Co. over trade secrets could lead to a “catastrophic supply disruption.” The U.S. International Trade Commission is expected to issue a closely watched ruling on that dispute Oct. 26.

The battery alone accounts for one-quarter to almost half the cost of an EV, and the top six suppliers controlled 87% of the global market last year, according to an Oct. 21 research report by UBS Securities. “Even with growing China exports, we expect the overseas battery market to remain tight,” it said.

Suppliers of batteries are wary of over-committing to any one automaker and eager to recoup the billions of dollars they have spent on production lines around the globe. Many are hedging their bets by crafting agreements with more than one partner. This small club includes the two South Korean rivals, Contemporary Amperex Technology Co. of China and Japan’s Panasonic Corp.

“Battery suppliers can be very picky with their OEMs,” said Nathalie Capati, a former battery engineer at General Motors Co. and Apple Inc. who now runs the Battery Lab, a consulting firm in San Francisco. “There are only a few cell suppliers who can meet their quality and volume. The automakers are at the mercy of cell suppliers these days.”

Panasonic has long been joined at the hip with Tesla Inc.: The two companies operate the massive battery plant known as the Gigafactory outside of Reno, Nevada. Chief Executive Officer Elon Musk has complained the Japanese company operates at a pace that constrains output of Tesla’s Model 3 sedan. Panasonic is adding a 14th battery-cell production line to the Nevada factory,

Tesla also sources batteries from CATL and LG Chem. But the Palo Alto, California-based carmaker has an insatiable need for batteries and Musk is eager to wean the company of its dependence on outside suppliers. Tesla plans to make its own cells on a pilot line near its auto plant in Fremont, California, and at a new factory it is building in Austin, Texas.

The EV push has taken on new urgency amid the dire climate crisis. European cities like Madrid and Paris and the Canadian province of British Columbia are among the jurisdictions phasing out the internal-combustion engine. And California, which has been choked with smoke from devastating wildfires, announced last month that it will ban the sale of new gasoline-powered cars in 2035.

By 2022, more than 500 different electric models will be available globally, according to an EV forecast from BNEF, which estimates that over half of all passenger vehicles sold will be electric by 2040.

A report issued last December by the Institute for Defense Analyses, a nonprofit that examines national-security issues, said battery manufacturers have taken on “outsized importance” in the auto industry and warned the U.S. hasn’t coordinated domestic supplies on the scale that Europe has, which would be a disadvantage if there are major bottlenecks or interruptions in parts of the supply chain.

Those sentiments were echoed recently by Mary Nichols, chair of the California Air Resources Board, during an event last month announcing the state’s plan to ban gasoline-powered cars.

“A new arms race has begun,” she said. “It’s an electric race to get to cheaper and more powerful batteries, and it’s one that manufacturers around the world are competing in.”

0
0   0
previous Delhi Govt planning to build effective EV infrastructure
next China's NEV sales to account for 50 per cent of all new sales by 2035, industry body says