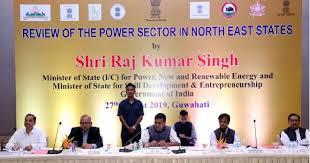 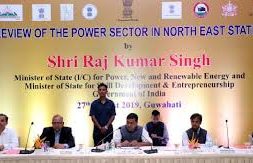 ‘Development of power sector a prerequisite for economic development of North-Eastern India’, says the Minister PPA signed between Arunachal Pradesh and NHPC Limited for supply of power from Subansiri Lower Hydroelectric Project

“Development of North-Eastern India is on high priority of the Union Government and a well developed power sector is prerequisite to the economic development in these States”, said Shri RK Singh, Union Minister of State for Power and New & Renewable Energy (IC) and Skill Development & Entrepreneurship. Shri Singh was speaking at the meeting of Chief Secretaries and Principal Secretaries of Power of North-Eastern States in Guwahati today. The meeting was also attended by the senior officers of Power Ministry and the representatives of the DISCOMS.

In his opening address, the Minister recalled the achievements made during the past 3-4 years in power sector.  However,he cautioned that concerted efforts will have to be made to make the system sustainable.  In order to redeem our pledge for 24/7 power, we will have to reduce the losses and make the DISCOMS viable. He cited example of some of States which had huge commercial losses but have been able to bring down the losses to 15% or below. He urged NE States to adopt smart and prepaid meters to avoidpower theft. He assured all the assistance from the Central Govt. to the State Govts. in creating power infrastructure in NE States.The Minister further stated that grant for Central Government schemes will be made available to only those states who undertakes reforms, viz, reduction of losses etc.

North-Eastern India has a huge hydro potential and the State Governments have a major role in hydro-projects by way of facilitating land acquisition and implementing the resettlement& rehabilitation plans. He assured full support for development of hydro-power in the region and called upon all stakeholders to work in close coordination so as to optimally harness the hydro potential. Development of hydro projects in Punjab and Himachal Pradesh had contributed to the prosperity of those States. Similarly, NE States can reap long term benefits out of developed hydro projects.

During the meeting, the Minister reviewed various power sector schemes & projects under implementation in the North-Eastern States, such as, Integrated Power Development Scheme (IPDS), DeenDayalUpadhyay Gram JyotiYojana (DDUGJY), Pradhan MantriSahajBijliHarGharYojana (Saubhagya) and R-APDRP. He noted the gaps and directed concerned agencies to speed up the completion of pending work and advised State Governments to extend necessary help in getting statutory clearances. It may be noted that new projects worth Rs.1797.43 crore have been sanctioned under IPDS for the region. The Minister thanked the States for their cooperation in implementation of the schemes & projects and assured of full support in future in this regard.

On this occasion, a power purchase agreement was also signed between Government of Arunachal Pradesh and NHPC Limited for supply of power from 2000 MW Subansiri Lower Hydroelectric Project.